Kangana Ranaut is the top notched actress among all the Bollywood Actresses in the Hindi Film Industry who is charged Rs 5-6 crore rupees per movie. Not only movie but she is earning a lot of money through TV Ads, modeling and brand endorsement of leading brands. 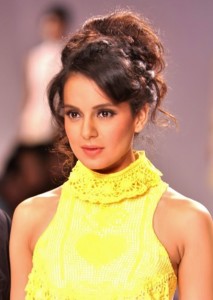 Kangana Ranaut, a small town girl is now one of the finest actresses in Bollywood. She was born on 23rd March, 1987 in Bhambla Village of Madi District, Himachal Pradesh state. Her father named Amardeep is a businessman and mother Asha is a school teacher. She completed her schooling from DAV School in Dehradun and an active participant of any competition conducted in her school. Later she starts her career in modeling in 2003 by taking part in Elle Modeling Agency. She is not only an excellent model but a very good actor and dancer especially trained Kathak Dancer.

At the age of 16 years she came to Delhi to become a leading model but afterwards she took interest in acting and under the training of Arvind Gaur, a leading theater director she learn how to perform on stage. In 2006, she entered in Bollywood and done her debut film Gangster with the co-actor Emraan Hashmi. For this film she was rewarded by the Filmfare Award as Best Female Debut and then starts her journey in Bollywood. She gives superb performances in various movies like Who Lamhe, Life In A Metro, Once Upon A Time In Mumbai, Raaz: The Mystery Continues and Tanu Weds Manu. In 2008, the movie released named Fashion which took her career at heights and she got National Award as well as Filmfare Award for Best Supporting Actress. Later, she done many movies but in 2014 she done a small budget movie named Queen which is amongst the blockbuster films of the year and for that movie she gain lots of appreciation and awards. Kangana Ranaut, a 29 years old lady achieved so much in a very short span of time and she is very talented and has a wonderful fashion sense which makes her countable among the stylish celebs of the country.

Kangana Ranaut remains controversial for her affairs. At the start of her career, she is in relation with Aditya Pancholi and after separation she was in relationship with Adhyanan Suman who is a son of Shekhar Suman. But later on she had a break up as she was not ready to do any commitment. Presently, she is single.

Got Kangana Ranaut Net Worth?

If you also want to share Kangana’s Biography, Earning, Rich Status and Net Worth then do write up your views below in comment section.