Since in the early period of 1980’s when economy of India was closed and muted, here a man Uday Kotak, who decides to start out on his own. He refused a high-income job option from one multinational company. Over the next few years, he ended his business into various areas of financial services, then organized a prominent presence discounts in bills, stock-trade, investment banking, finance, life insurance and mutual funds. The Chairperson of the Kotak Mahindra, Uday Kotak net worth is around $ 7.6 billion. 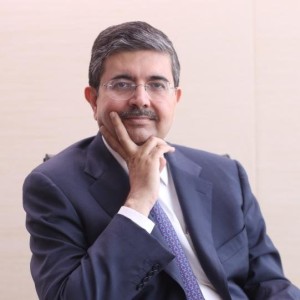 Born on 15th of March in 1959 in Mumbai, this man brought a revolution in the banking sector resulted in boosting the economy power of the nation. Talking on to his personal life, Uday Kotak belongs to Gujarati Ethnicity and currently he is 56 years old. Her Better half is Pallavi Kotak and he has two children’s. Uday was raised in an upper middle class Gujarati joint-family in which 60 persons sharing a common kitchen under one roof. His family was originally into the business of cotton trading. He named it “Capitalism at work and Socialism at home”.

Uday has an excellent grip over mathematics and his talent in the same influenced his choice of career. Uday Kotak completed his Bachelor’s Degree from Sydenham College and obtained his post graduation in management studies in the year 1982 from reputed Jamnalal Bajaj Institute of Management Studies.

Uday pastimes had been in cricket and playing the sitar. In an interview with a news channel NDTV he admitted that he was no longer pursuing his playing of the sitar. The Vice Chairperson and the M.D of Kotak Mahindra Bank is a truly self made Indian Business man with a net worth of 7.6 billion dollars. What makes this man different from others is that, not only he has made a prodigious fortune but has also created a name in the investment, banking sector. Currently, Kotak Mahindra Bank is the 3rd largest private sector bank in India. The third largest private sector bank took birth on 22nd of March 2003, and became the first company in the history of corporate sector of India to receive a banking license from Reserve Bank of India. He was named Ernst & Young World Entrepreneur of the Year 2014.

The Turning Point in his Life:-

He soon realized the vital importance of the banking industry in the market like India. He wanted to make an entry and explore the banking sector. He observed that the banking was controlled in inappropriate ways by state owned banks and created hindrance for the foreign banks to inaugurate new branches because of the regulatory approvals. Mr. Kotak predicted that his bank will derive its market share at the cost of state owned banks. Hence Mr. Uday decided to make an entry into the banking sector by applying for a banking license with the RBI and said that now dramatic change has taken place in the country. The people of this nation especially savers has turned into an investors and spender and an exploding opportunity for a banker was finally granted with the same in 2003. The license for banking was allowed to Uday to operate at least in 6 different businesses from a single dais.

Got the idea of  Uday Kotak Net Worth.?

Want to share anything about Uday Kotak Biography, Earning, Salary, rich status and Net worth? Do write us below in the comment section.